Aston Martin has chosen the Canadian International Autoshow as the venue for the official unveiling of its 200mph+ carbon fiber hypercar, the AM-RB001. 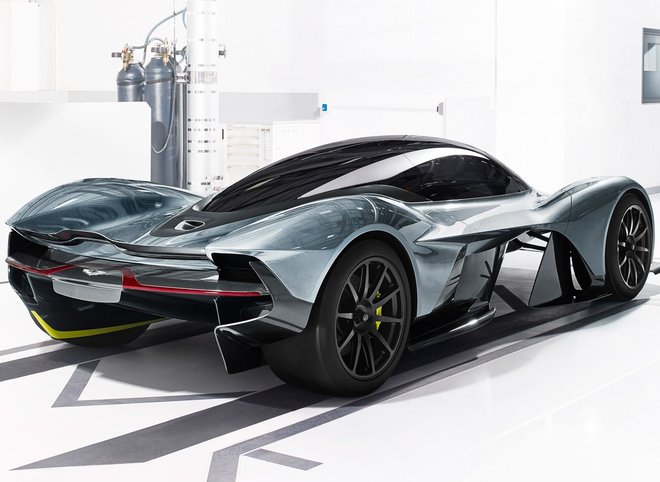 The long awaited Aston Martin AM-RB 001 has finally made its way to the stage at the Canadian International Autoshow. The company unveiled the concept version of this new model at its UK headquarters in July, but this has been the first time that anyone other than potential owners will have seen it in the flesh. “The AM-RB 001 is destined to become the defining hypercar of this decade and a hugely desirable investment for collectors and enthusiasts,” said Aston Martin President and CEO, Dr. Andy Palmer.

Developed in partnership with Red Bull Racing and its superstar Formula 1 designer, Adrian Newey, the AM-RB001 boasts a mid-mounted naturally aspirated V12 engine and a one-to-one power to weight ratio. It also uses cutting-edge racing developed aerodynamic trickery so that it behaves like an F1 car in the bends and at the limits of grip. However, because all of these systems have been largely integrated to the car’s underside, there are no huge spoilers, splitters or side skirts negatively impacting on the car’s visual aesthetic.

Even with such an impressive team working on the AM-RB001, there is no guarantee that it will be a decade defining hypercar. Especially as Mercedes-AMG is plotting a similar vehicle of its own that will be unveiled at this year’s Frankfurt Auto Show in September. However, in terms of its appeal to the car collecting community, the Aston boss is completely correct.

Even though this car won’t be going into production until 2018 and when it does it will come with a £2 million price tag, every one of the 150 planned examples (25 of which will be track-only models) are already sold out. What’s more, if a potential owner changes his or her mind, Aston won’t be worried, as there’s a long list of people waiting to step in and take a car if an order is cancelled.

The 2017 Canadian International Autoshow will be held at the Metro Toronto Convention Centre and opens its doors to the public on February 17.